Institutional racism (or systemic racism) describes forms of racism which are structured into political and social institutions.

It occurs when organisations, institutions or governments discriminate, either deliberately or indirectly, against certain groups of people to limit their rights. This form of racism reflects the cultural assumptions of the dominant group, so that the practices of that group are seen as the norm to which other cultural practices should conform. It regularly and systematically advantages some ethnic and cultural groups and disadvantages and marginalises others.

Institutional racism is often the most difficult to recognise and counter, particularly when it is perpetrated by institutions and governments who do not view themselves as racist. When present in a range of social contexts, this form of racism reinforces the disadvantage already experienced by some members of the community. For example, racism experienced by students at school may result in early school dropout and lower educational outcomes. Together with discrimination in employment, this may lead to fewer employment opportunities and higher levels of unemployment for these students when they leave school. In turn, lower income levels combined with discrimination in the provision of goods and services restrict access to housing, health care and life opportunities generally. In this way, institutional racism may be particularly damaging for minority groups and further restrict their access to services and participation in society.

The Australian Bureau of Statistics has gathered data on Aboriginal and Torres Strait Islander deaths and non-Indigenous deaths by age, and sex: 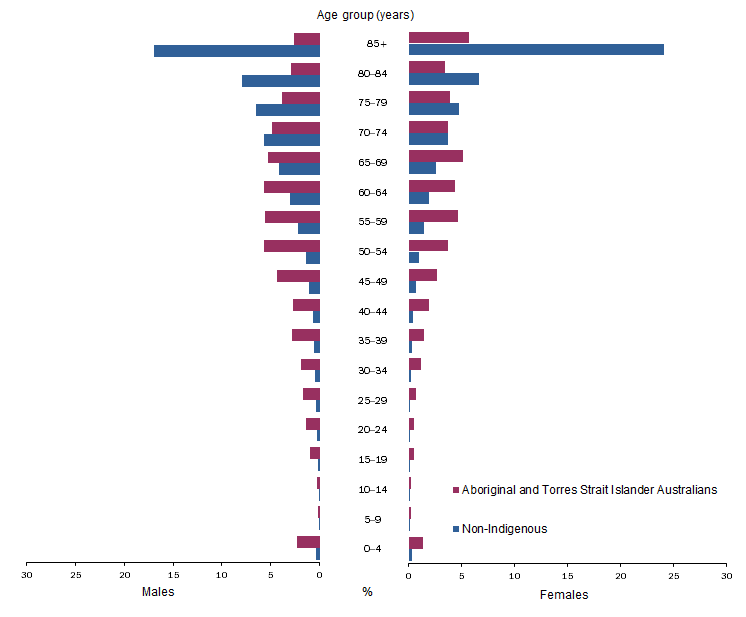 “Deaths of Aboriginal and Torres Strait Islander Australians are more widely spread across younger age groups, whereas deaths of non-Indigenous persons are concentrated in the older age groups.” Australian Bureau of Statistics, 2018

“If you look at health, we know that the life expectancy gap between Indigenous and non-Indigenous Australians remains about a decade – again, an indication of the historical legacy of dispossession and racism; a situation that is quite deplorable in what is an advanced and prosperous liberal democracy.” Dr Tim Soutphommasane, Race Discrimination Commissioner – 2013 to 2018